The initial idea for Chernobyl was exactly to pay tribute to the liquidators..”to those who saved the world ” as the memorial says,  and create artwork to be placed in the power station or at least around it. I had a vague memory of the accident and even though fascinated by the event my knowledge was very limited. Doing a bit more research I decided to take into consideration the abandoned city of Pripyat and the people who lived there changing the project slightly. To pay tribute to the liquidators and  all those people that left their homes . I decided that it would be nice to bring them back home somehow. The project is based on original photos from Pripyat  and recreate everyday situations bringing life back to a city that remained abandoned for over 30 years.

The one day trip was short and allowed me to only  put few designs up ….to be continued 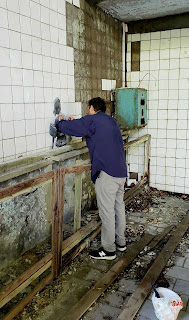